Posted By Teman Bang Sandi
Sandiaga Salahuddin Uno, a politician with a business background and a vice presidential candidate of presidential candidate Prabowo Subianto has reminded the government of the weakening of the rupiah against the US dollar. He said the government must focus on dealing with the weakening of the rupiah exchange rate and not on spending more time in politics. 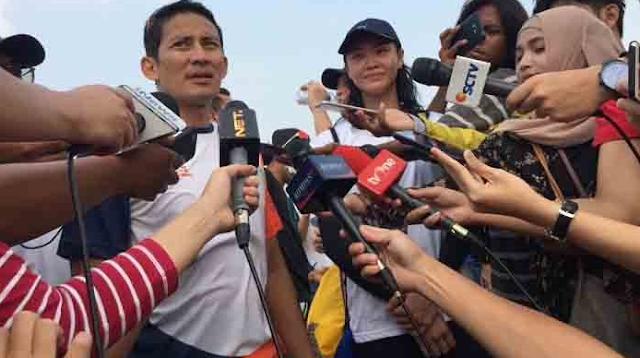 "We should not mix economics with politics. Just focus on the economy first, that is what we hope for," Sandiaga told Antara in Pekanbaru, Riau Province, on Tuesday.

Today, the rupiah exchange rate against the US dollar is at the level of Rp14,896.25. Sandiaga noted that the government must be aware of the weakening of the exchange rate, especially the price of basic needs of the community.

In fact, Sandiaga also expressed concern over the weakening of the rupiah exchange rate, which will affect the company's production costs, leading to the potential for termination of employment or layoffs. For this reason, the former deputy governor of Jakarta called on the government to sit together with the businesses in addressing this phenomenon.

"This is the time for the government and the business world to sit together to address the rupiah depreciation that burdens the community. I am worried that the increase in prices and production costs of companies will lead to layoffs," he explained.

He reminded the government to start tightening belts and delay imports that were not needed. "Postpone dollar-based expenditures, delay the import of unnecessary goods, and encourage the use of local products," he added.

Sandiaga had previously refuted the invitation for economic debate from Jokowi-Maaruf Amin's national campaign team. He argued that this nation must be united and must not be engaged in economic debate, but rather participate in discussions in solving problems.

He even revealed that he had held a meeting with the former governor of Bank Indonesia, Agus Martowardojo, to discuss the resolution of economic problems in the next three to five years. "The fluctuations in the exchange rate that continue to occur cannot be separated from external policies that cannot be controlled, but we have to focus only on internal policies," he remarked.

"My hope is that the economy will be the center of our attention. We should stop 'political bickering' first and focus (on improving the economy). I do not see catalysts that can stabilize our economy in the next six to nine months. Therefore, we must unite," he pointed out.

Meanwhile, Coordinating Minister for Economic Affairs Darmin Nasution noted that the government had improved the performance of the real sector, including tourism, mining, and industry, in a bid to reduce the current account deficit. He called on the public to not compare the current depreciation of the rupiah with the situation before the monetary crisis in 1998 during which the rupiah has dropped sharply to some Rp14 thousand against the US dollar.

He emphasized that the government's macro economic policies are still effective to be implemented. The US dollar has reached its highest level in a week against other currencies on Monday.

The sell-off in emerging market currencies and the escalating global trade tensions have sparked demand of the greenback. The US dollar was traded higher on Tuesday morning against some currencies. The rupiah was recorded at Rp14,816 against the greenback.